Courtesy of the CFAR leadership, we have decided to send you a short summary of notable abstracts from each day of the AIDS 2020 Virtual conference. Please note that this summary is by no means meant to be a comprehensive overview of all the abstracts presented at AIDS 2020, but a highlight of the oral abstracts from each day with a focus on those presented from investigators from UCSF and our UCSF-Gladstone CFAR affiliates.

The plenaries this morning (Wednesday, July 8) were on Social Factors and were very important. The first plenary was from sociologist Dr. Celeste Watkins-Hayes from Northwestern University who gave a great talk on the injuries of inequalities in the HIV/AIDS pandemic. The talk necessarily discussed COVID-19 and the structural inequalities there. She suggested policy changes that could change the course for both diseases, with a shout out to UCSF’s very own Dr. Judith Auerbach! 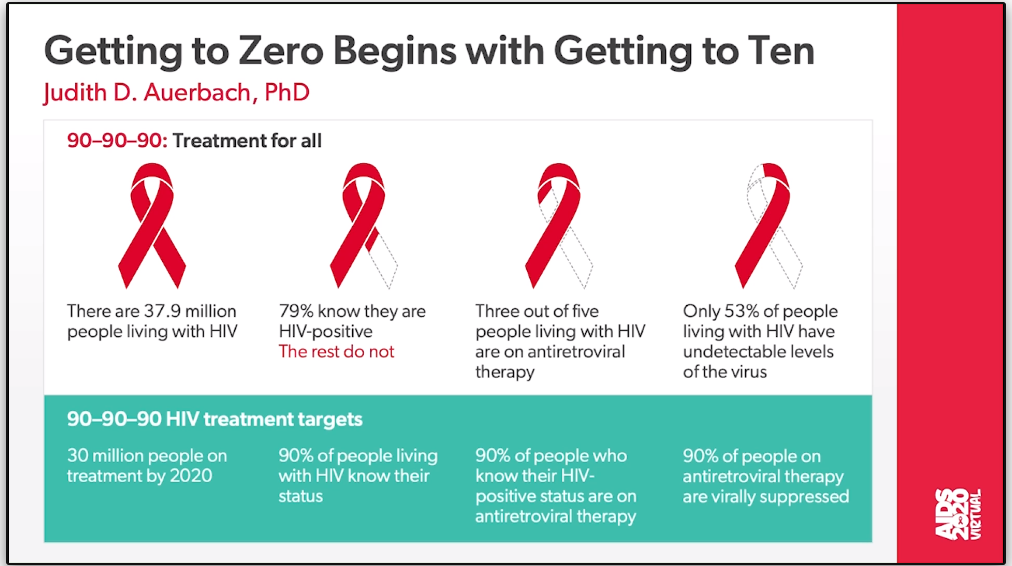 The second plenary on climate change and HIV was also fascinating. Definitely watch it when you can! The talk was given by Dr. Matthew Chersich from Wits Reproductive Health and HIV Institute and was entitled “HIV and the climate crisis: Collision or confluence”. Did you know heat can increase HIV risk and mortality? Watch this to find out why.

We have downloaded the video and many other sessions, which you can access here.

On Wednesday (and some hold-overs from Tuesday!), there was a lot of exciting science presented in track A.

First, a shout-out to Ashley George, a Postdoctoral fellow in the Roan lab at GIV, who won the IAS/ANRS Lange/van Tongeren Prize for Young Investigators in Track A for her poster discussion in PDA02. Kill or be killed: HIV vs host immune responses. Ashley presented her exciting recent work using a novel CyTOF-based assay, which revealed that CD4+ T cells that express low levels of cellular restriction factors tend to be more likely to get infected by HIV, but that once infection occurs, many interferon-induced cellular restriction factors (including many innate RNA and DNA sensors) get upregulated. These results may have implications for HIV cure strategies moving forward, particularly in light of recent observations from Katy Bar and Beatrice Hahn (UPENN) suggesting that viral rebound during ATI seems to occur primarily among viruses that are highly interferon-resistant. Other interesting presentations in the same poster discussion include one highlighting the link between semen exposure and inflammation in the cervical tissue of women at risk for HIV in CAPRISA (Jewanraj, CAPRISA) and others highlighting innate and adaptive immune factors that influence HIV transmission in the female reproductive tract. Another abstract in the session detailed novel mechanisms by which IFNa impacts the host glycome, potentially modulating inflammation in treated HIV infection (Giron, Wistar institute).

In the Co-Chair’s choice session, we also heard about the “Brazil Patient,” which was highlighted in the NYT earlier in the week. In OAXLB0105, Ricardo Diaz (UNIFESP, Brazil) described what may be the first long-term remission of chronic HIV-1 infection without myeloablation. A chronically infected individual with a high viral load started an intensified ART regimen for 1 year including the CCR5 inhibitor maraviroc (thought to induce HIV latency reversal) and nicotinamide (which is hypothesized to improve CD8+ T cell function). During the intensified regimen, the participant had a few detectable VL blips (unlike the other participants in the study). HIV DNA levels in PBMC actually increased during the year of the investigational regimen, but subsequently declined to undetectable levels in the ensuing year when ART alone was continued. Titers of HIV-specific antibodies also declined during this period. An analytic treatment interruption was performed and the patient has continued to have undetectable viral load for over a year after interruption. It remains to be seen whether the long-term remission is a consequence of the latency reversing effects of maraviroc and a potential protective effect of nicotinamide on CD8+ T cell responses. No doubt many independent labs will try to confirm some of these results as well. Steve Deeks’ quote in the NYT about sums it up: “Am I skeptical? Of course… Am I intrigued? Absolutely.”

Other Track A highlights:

OAA03 - HIV vaccine development: How to forge ahead. This session featured several interesting talks related to HIV vaccine development. Nitesh Mishra (All India Institute) presented an interesting study highlighting the interesting observation that HIV-infected infants seem to generate neutralizing Abs more readily than adults. This seemed to be linked to infection with multiple viral variants. George Pavlakis (NCI) and Anusmita Sahoo (Emory) presented strategies to optimize the production of V1V2 Ab responses. Barbara Felber (NCI) also presented a study showing that administration of DNA prime and protein boost vaccinations in the same muscle provides better immunogenicity than priming and boosting on contralateral sides of the animal. A highlight of the session was a talk by Hiroshi Ishii (NIAID), which showed that a vaccine that preferentially elicits SIV-specific CD8+ T cell responses over CD4 responses (the latter being potentially problematic targets for HIV infection) appeared to confer significant protection against SIV rectal challenge. This strategy may be a way forward for T cell vaccine strategies, which have failed to protect in past studies in humans, potentially as a consequence of the problematic expansion of HIV-specific target CD4 cells.

OAA04. New insights into the HIV reservoir. Bethany Horsburgh (Westmead Institute) presented a study in collaboration with UCSF’s DARE collaboratory demonstrating that intact proviruses were more numerous in HLA-DR expressing viruses than resting cells, further underscoring the contribution of cell proliferation to reservoir maintenance. Hiromi Imamichi (NIAID) presented an interesting study characterizing intact and defective viruses in autopsy tissues from people with HIV who died while ART-suppressed. She found HIV RNA and DNA in all tissues despite undetectable plasma VL at the time of death, though intact genomes seemed to be more concentrated in lymphoid tissues. There was also evidence for substantial clonal proliferation in the tissue reservoirs. In work led by our own Sulggi Lee (HIV-ID-GM), Pavitra Roychoudhury (UW) presented a study characterizing the integration site landscape of ART-suppressed individuals in the SCOPE cohort. She found that HIV preferentially integrates into open chromatin and cell cycle and inflammation genes. These findings correlated strikingly well with integration sites seen in a humanized mouse model and suggest that HIV preferentially integrates into genes that are actively being transcribed at the time of infection. 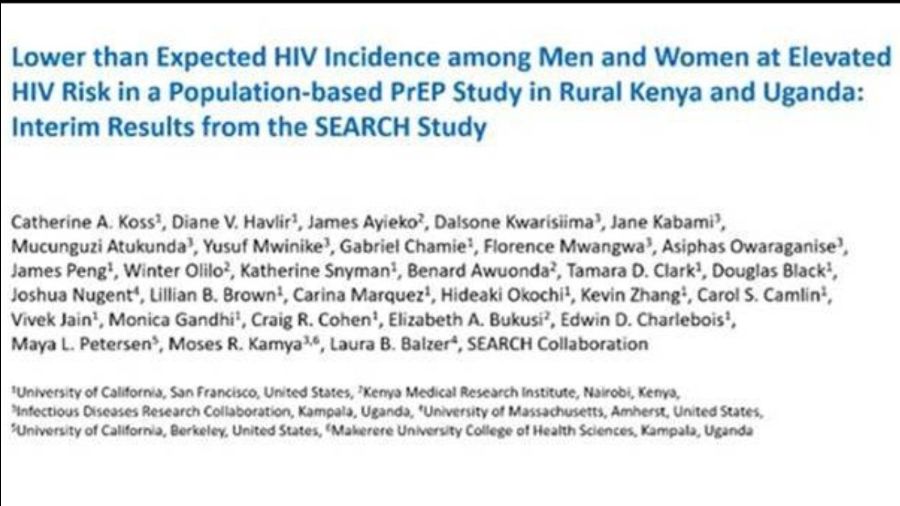 PrEP
SEARCH PrEP study
We give a shout-out to the oral presentation by Dr. Catherine Koss from UCSF on behalf of the SEARCH team on PrEP (Abstract OAC0805) with the full authorship list and abstract name on the title slide shown here. In brief, during population-level HIV testing in rural Kenya and Uganda, the SEARCH study offered universal access to PrEP with a flexible service delivery model, including follow-up visits at clinics or community sites. Of 74,541 individuals who tested negative for HIV, 15,632 were assessed to be at elevated HIV risk, of whom 5,447 (35%) started PrEP. Over 7,150 person-years of follow-up, HIV incidence among PrEP initiators was 0.35% (95% CI:0.22-0.49) overall; incidence in women was 0.46% (CI:0.24-0.68) and in men was 0.23% (CI:0.09-0.41). Compared to expected HIV incidence without PrEP (using propensity score-matched recent controls from the year before PrEP was available), observed incidence was 74% lower than expected (aIRR 0.26; CI:0.09-0.75). There was also a 76% reduction in incidence among women (IRR 0.26; CI:0.07-0.79) and a 40% reduction in incidence among men (IRR 0.60; CI:0.12-3.05). The authors note that these results show that in generalized epidemic settings, offering universal HIV testing with linkage to treatment and prevention, including PrEP with flexible service delivery, is a promising approach to accelerate reductions in new infections. 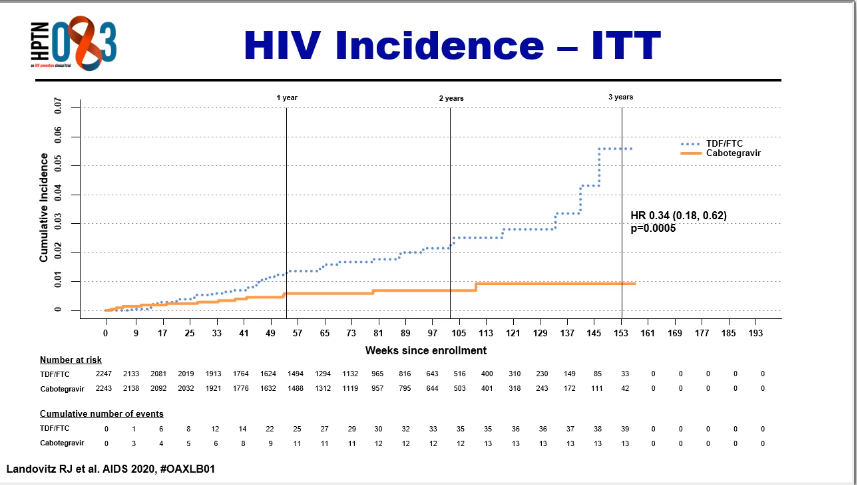 But please pay attention to this slide below (where we collapsed 3 slides) of the 13 infections that occurred on IM CAB every 8 weeks. Look at the infections in the green box. Why would infections occur during continuous on-time IM CAB? This worries me. As the study authors report, they tried hard to get resistance data from the HIV breakthroughs in both arms. Do people who breakthrough cabotegravir in those 13 cases fail with integrase inhibitor resistance which would severely curtail their ability to get first-line therapy (INSTI-based) for HIV? However, the COVID-19 pandemic curtailed their ability to get this data in time. Cabotegravir has a long pharmacokinetic tail. From the treatment studies (FLAIR, ATLAS 1M), cabotegravir seems to have a lower genetic barrier to resistance than dolutegravir and bictegravir so we need to ensure that we don’t see virologic failures with INSTI resistance with cabotegravir in HPTN083 and await that data. Also, there was more weight gain in those on cabotegravir than those on TDF/FTC (maybe due to weight loss on latter). 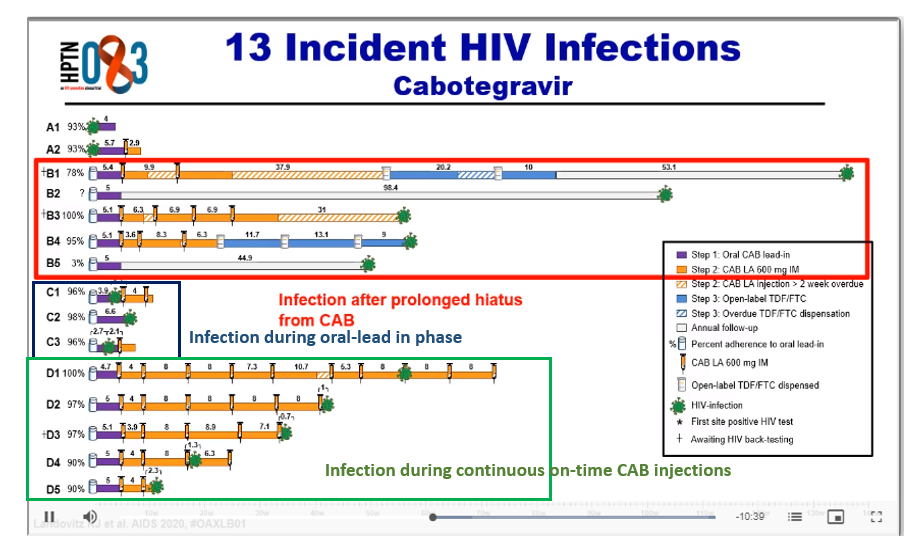 Co-Chairs Session – ADVANCE study.
This is simply NOT a good conference for ART and weight gain, especially when it comes to TAF alone, DTG alone (as summarized yesterday) and the combination of DTG and TAF (ADVANCE).
The ADVANCE trial: Phase 3, randomised comparison of TAF/FTC+DTG, TDF/FTC+DTG or TDF/FTC/EFV for first-line treatment of HIV-1 infection, Abstract OAXLB0104 –Dr. Sisimo Sukhela

ADVANCE is a 96-week, open-label randomized trial in South Africa, comparing TAF/FTC+DTG, TDF/FTC+DTG and TDF/FTC/EFV. The 48 week results were presented and showed equivalent efficacy in the 3 groups, but more weight gain in the DTG-containing groups especially with TAF so what happened with the weight gain here? 1053 PLWH were randomized between February 2017 and May 2018: 99% black, 59% female, mean age 32 years, with mean CD4 336 cells/uL. At week 96, the percentage of participants with HIV RNA <50 copies/mL was 78.6% for TAF/FTC+DTG, 78.3% for TDF/FTC+DTG and 73.5% for TDF/FTC/EFV. In the on-treatment analysis, 96% of participants on TAF/FTC+DTG, 95.7% on TDF/FTC+DTG and 95.5% on TDF/FTC/EFV had HIV RNA <50 copies/mL at Week 96. Both DTG arms demonstrated non-inferior efficacy versus the EFV arm.

But the weight gain increases (worse among women than men) continued even past 48 weeks and on to 96 weeks as shown below. And more concerning, metabolic events were also higher (due to this weight gain, no doubt) in the groups with the most weight gain. See slides below. Concerning features for the combination of DTG+TAF and the study author seemed quite relieved that TAF was not available in sub-Saharan Africa to be put with DTG during roll-out (except for bone or renal insufficiency). 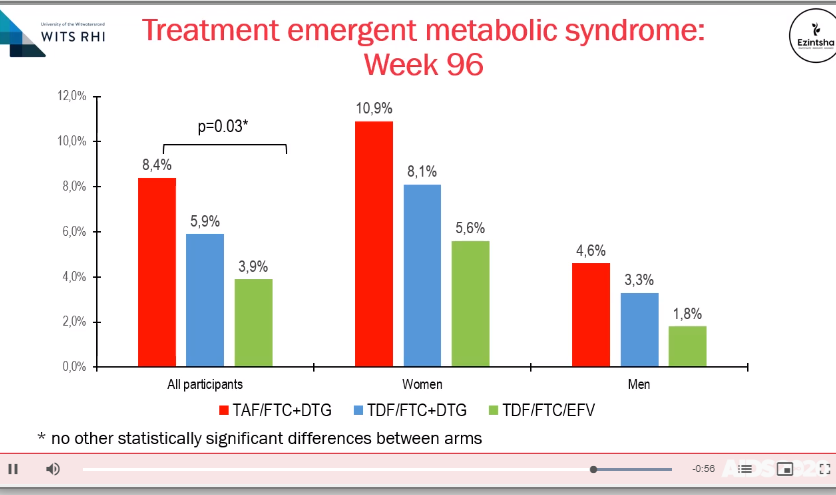 Fast summary of some studies important to clinical care:

Nickels at al Abstract POB0104:
This systematic review shows that DTG/3TC versus 3-drug ART across a number of studies was efficacious and safe. However, the risk of failing DTG/3TC is massive resistance to two very important drugs so I would also say – ensure good adherence first! And know the inclusion criteria of the studies included in this review. 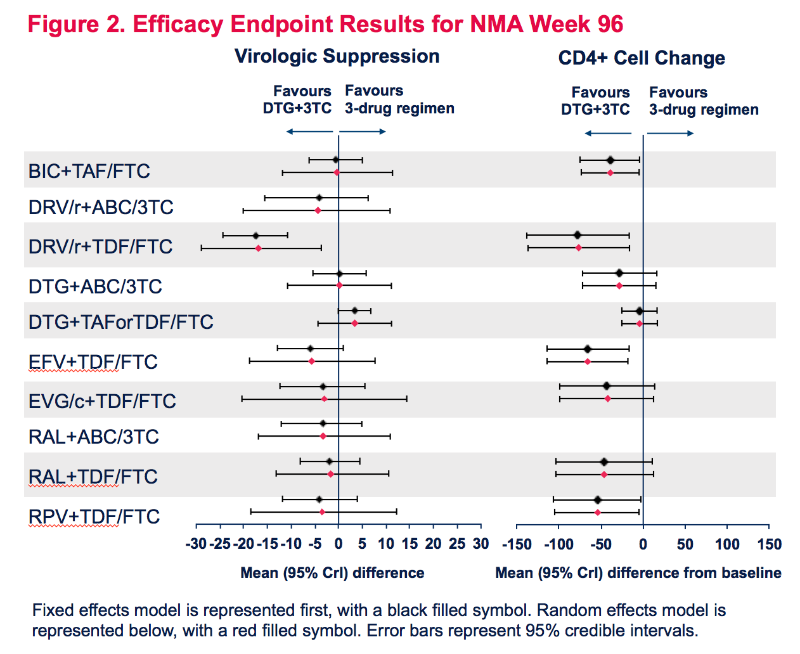 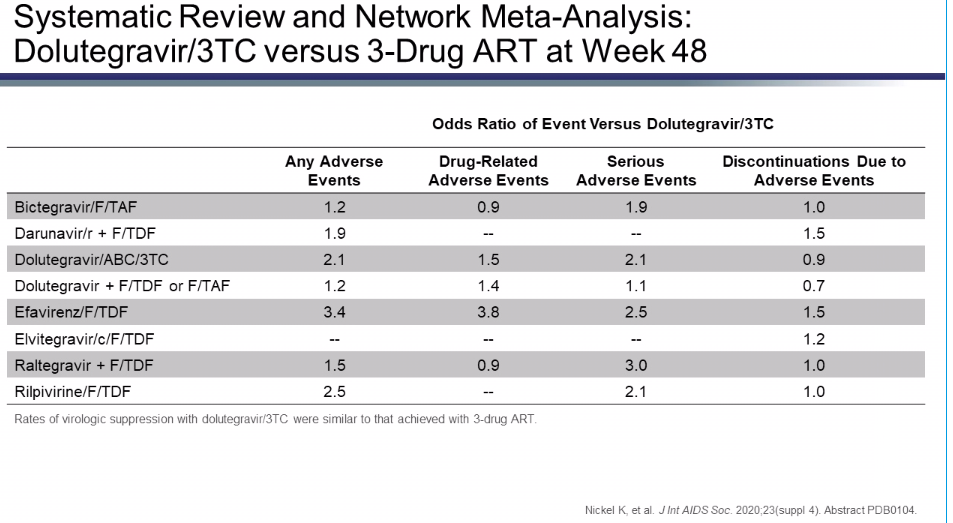 Wang et al. Abstract PEB0238.
Since weight gain and metabolic changes are the concern of the day, TANGO (switching to DTG/3TC versus continuing TAF-based regimen) looked at metabolic and weight changes with this strategy. Reminder of study design below and the switch’s main conclusions below. 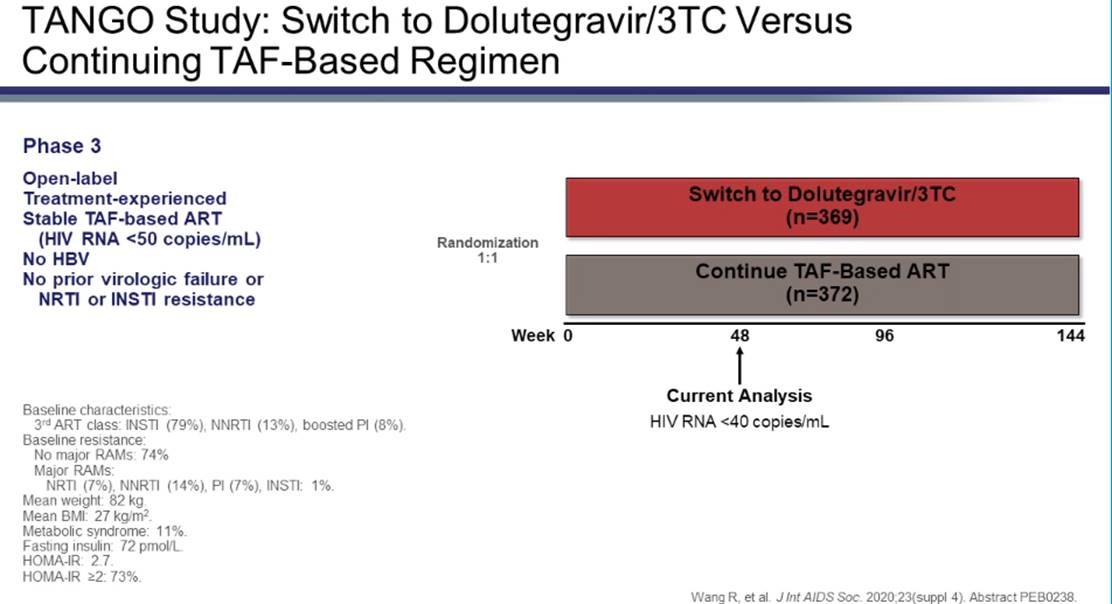 Orkin C et al. Abstract OAB0302.
In a Phase 2B study that looked at the new translocation and end termination inhibitor- islatravir- in combination with doravirine (both made by same drug company), study authors wanted to find best dosing of islatravir and how patients did at 48 weeks with doravirine + these 3 different doses of islatravir as shown below. As you can see, the study was small- just 30 individuals in each group with islatravir given at 0.25mg, 0.75mg, 2.25mg in combination with doravirine. You can see in the results slide below that all 3 doses did fine (with 1 failure to > 50 copies/mL) in the 2.25mg islatravir dosing arm. None of the failures had high enough viral loads to genotype (all below 400 copies/ml). We now await Phase 3 studies and the chosen dose. 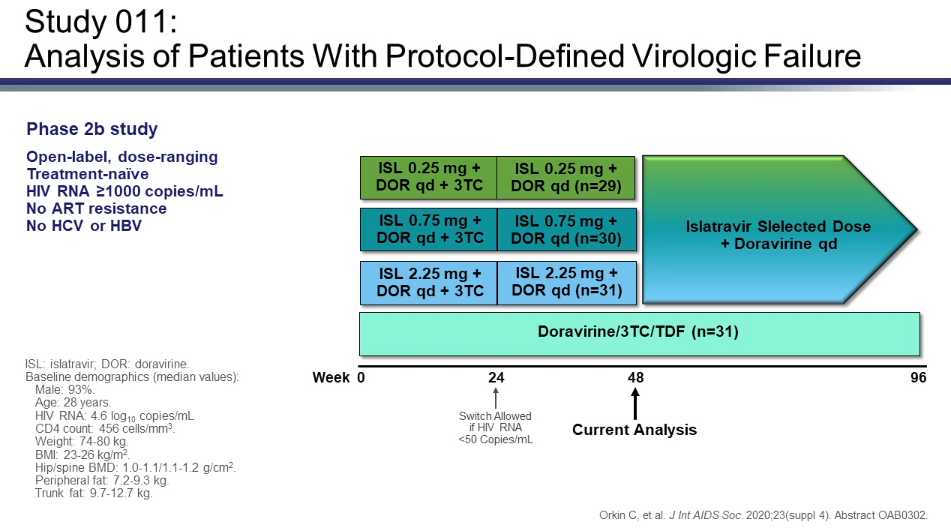 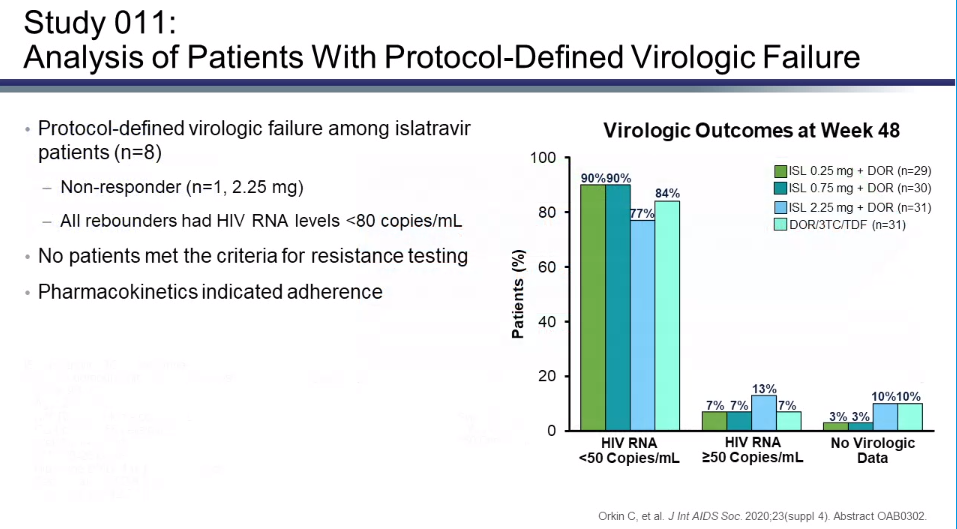