Courtesy of the CFAR leadership, we have decided to send you a short summary of notable abstracts from each day of the AIDS 2020 Virtual conference. Please note that this summary is by no means meant to be a comprehensive overview of all the abstracts presented at AIDS 2020, but a highlight of the oral abstracts from each day with a focus on those presented from investigators from UCSF and our UCSF-Gladstone CFAR affiliates.

The first plenary on Tuesday July 7, 2020 morning was from Greg Millett MPH, Vice-President of AmfAR called “Casualties on the road to ending HIV: Context matters in addressing HIV disparities.” This was an amazing tour-de-force talk on disparities in HIV around the country with commentary on disparities in the COVID-19 pandemic. Very data-driven talk with a profound look at structural inequities on all infectious diseases pandemics in the United States (with chilling commentary on the legacy of slavery), with recommendations on policy changes we can enact now. His talk included a paper from Ward 86 on differing virologic suppression rates with different degrees of housing status. 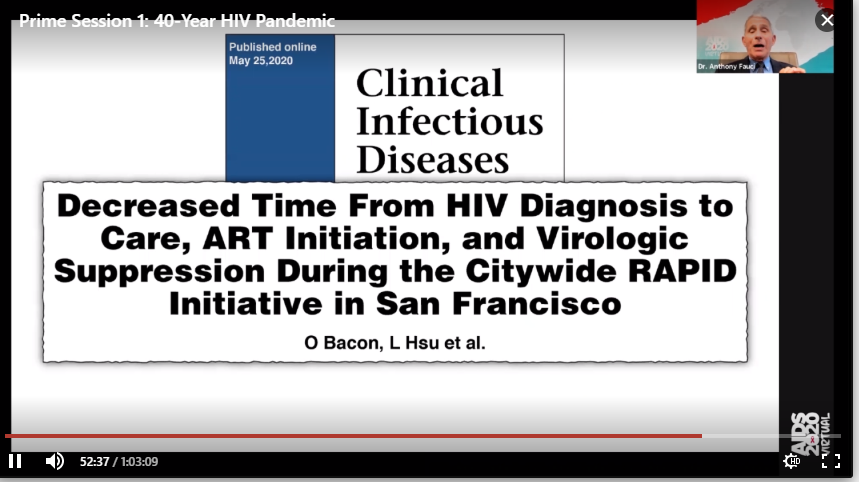 The second plenary was from Dr. Anthony Fauci on “Ending HIV: Research Progress and Priorities." Dr. Fauci gave an overview of the Ending the HIV Epidemic initiative in the United States with a focus on demographics and geography threatening these goals, requiring tailored solutions. He mentioned the Center for AIDS Research (CFARs) specifically – yay! – in advancing our goals toward EHE and also specifically gave praise to the San Francisco Getting to Zero initiative and the city-wide RAPID program (Oliver Bacon, Diane Havlir, Susan Buchbinder, Darpun Sachdev, Susan Scheer, Ling Hsu, among others), along with mention of Jae Sevelius’ CFAR EHE grant on PrEP for transgender individuals.

We have downloaded the video which you can access here.

The one Track A oral session on Tuesday featured UCSF’s own Michael Peluso (Division of Infectious Diseases, and Global Medicine), recent recipient of our CFAR’s 2020 award for Excellence in Translational Research.

In OAA01, Controlling HIV: Lessons from HIV controllers, Michael’s work was featured among a group of talks highlighting the virologic and immunologic features of the natural control of HIV infection. In his talk, Michael demonstrated that levels of intact (and putatively replication competent) proviral DNA are very low in HIV controllers, particularly among those with protective HLA alleles. As proviral DNA levels correlated with HIV RNA expression from cells, his presentation provides further evidence that a robust HLA-restricted antiviral response may be particularly important in clearing cells harboring replication-competent virus in HIV controllers. These data support current functional HIV cure strategies that seek to boost HIV-specific T cell responses, as in the currently enrolling trial led by Michael and Steve Deeks in the amfAR Institute for HIV Cure research. Other talks in the session addressed: the characterization of intact and defective HIV genomes in natural HIV controllers vs. post-treatment controllers (Avettand-Fenoel, U Paris); a potential role of long non-coding RNAs in the control of HIV replication (Trypsteen, Ghent U); the contribution of T cell function and exhaustion to pediatric HIV controllers (Vieira, U Oxford); and the virologic and immunologic characterization of adult HIV controllers (Khan, Imperial College). Collectively, these presentations help characterize features of the natural control of HIV infection that may inform HIV cure strategies.

Vaccine and Cure Plenary. Thumbi Ndung’u (U KZN) gave a terrific plenary, providing a high-level overview of HIV vaccine development approaches including recent successes and failures. He also reviewed the general cure strategies being considered in the field, highlighting the probable need for proof-of-concept studies to be conducted in individuals who initiated ART at early stages (and with low pre-existing reservoirs), and combination approaches including T cell and neutralizing antibody-based strategies to maintain long-term immune control of the virus.

CCR5 inhibition with leronlimab may protect against SHIV transmission. Xiao Chang (OHSU) showed data demonstrating that the injectable anti-CCR5 antibody leronlimab (formerly known as PRO140) appeared to protect macaques against SHIV transmission in those receiving the high dose every other week. Whether its parenteral administration and lack of inhibition of native CCR5 ligand signaling will offer advantages over previously tested maraviroc-based PrEP remains to be seen.

The Oral Abstract Session entitled “Can we achieve UTT? What can UTT achieve?” featured presentations from the large Universal Test and Treat Campaigns including UCSF’s very own SEARCH study, led by Drs. Diane Havlir, Maya Petersen, and Moses Kamya. James Peng from the study team presented an oral abstract entitled “Geographic hotspots of high population HIV viremia and association with HIV incidence in a universal test-and-treat setting in rural Uganda and Kenya?” which found that, among 106, 164 adults in the SEARCH study, median local viremia was 2.0% in Uganda and 3.7% in Kenya at baseline and declined to 0.8% in Uganda and 1.8% in Kenya after three years. However, there were local geographic hotspots of focal viremia in the study, suggesting a role for geospatially-targeted testing and care engagement strategies.

Virologically suppressed US adults with HIV gained 1.8 to 4.47 kg in weight in the first 9 months after switching from tenofovir disoproxil fumarate (TDF) to tenofovir alafenamide (TAF), according to analysis of a large US cohort called the OPERA study. At that point weight gain slowed, plateaued, or even reversed. The ADVANCE study and the DISCOVER trial had already linked TAF to more weight gain than TDF. In this longitudinal OPERA cohort, prospective data was collected from adults virologically suppressed on 3-drug therapy with TDF who switched to TAF (N = 6919). Weight gain of +2.64 kg was seen per year with the switch from TDF to TAF (other ARVs maintained) and weight gain of +2.55 to +4.47 kg/yr (depending on INSTI) with switch from TDF to TAF and non-INSTI to INSTI 9 months post-switch, after which the weight gain plateaued. This large study adds to the growing data on weight gain with TAF. Tomorrow, we will report on the weight gain in the 96 week study of ADVANCE.

In the DRIVE-SHIFT trial, adults virologically suppressed on 2 NRTIs + boosted protease inhibitors were switched to DOR/3TC/TDF (N = 656). More than 2 years after the switch, average weight increased only 1.2 to 1.4 kg in the DRIVE- SHIFT trial. Almost three quarters of participants switching to the doravirine regimen had less than a 5% weight gain at week 144. The adjusted weight change at week 144 was lower in people switching from an integrase inhibitor (0.79 kg immediate, 0.63 kg delayed) than in those switching from a nonnucleoside (1.45 kg immediate, 1.29 kg delayed) or a protease inhibitor (1.41 kg immediate, 1.25 kg delayed). Average weight gains after the switch to DOR/3TC/TDF averaged less than 1 kg after 12 months. More than 70% of trial participants gained less than 5% of their initial weight, and fewer than 10% of participants gained 10% or more weight. This study did not show that weight decreased with the NNRTI, but weight gain was not very substantial compared to what we have seen recently with TAF or DTG.

Primary outcomes from the TANGO study demonstrated that switching to DTG/3TC is non-inferior at 48 weeks to continuing a 3-/4-drug TAF-based regimen (TBR) in virologically suppressed PLWH (comparison was made whether the regimen had boosting agents or not). Switching from TDF to TAF or using boosting agents has been associated with weight gain and dyslipidemia so this study set about to look at weight gain with the switching strategy. Adults virologically suppressed on TAF-based regimen who switched to DTG/3TC (n = 369) or continued TAF-based ART (n = 370). The study found weight gain of +0.81 kg with switch to DTG/3TC vs +0.76 kg with continued TAF-based ART at week 48. There was a significant improvement in lipids with switch to the DTG/3TC regimen, as well as lower insulin resistance with DTG/3TC vs TAF-based ART (OR: 0.59; P = .008). Overall, switching from 3-/4-drug TAF-based regimens to the 2-drug regimen of DTG/3TC led to similar small increases in weight, but general improvements in other metabolic health parameters, over 48 weeks. More pronounced differences favoring DTG/3TC were noted compared to the unboosted TAF-based group for fasting insulin and metabolic syndrome, and to the boosted TAF-based group for lipids and insulin resistance.

In OAD01, Breaking the Silence of Stigma: Innovative Approaches, two UCSF investigators highlighted stigma-related innovative projects. Andres Maiorana reported results of a qualitative study of US-residing Latino gay men living with HIV with a focus on challenges to optimal treatment outcomes related to intersectional identities including homophobia and HIV stigma. Erin Wilson presented qualitative findings from young transwomen with HIV in Brazil and their health care providers, with a powerful theme of young transwomen avoiding health care as a survival mechanism to prevent discrimination and ostracization. Other presentations addressed the importance of emphasizing resilience when measuring HIV stigma (Friedland), the central role of family members as key allies in managing HIV stigma and fostering resilience in Zimbabwe (Masvawure), and the use of a counseling intervention to reduce stigmatizing attitudes related to HIV in an antenatal care setting in Tanzania (Watt). Collectively, these presentations provided a clear recognition of the ongoing challenges posed by stigma and provided potential avenues for responding to the HIV epidemic.

Session OAD02, Gender Dynamics and HIV Transmission, featured work to understand and mitigate the impact of gender-related factors on the HIV epidemic. The presentations included (1) a focus on male partners of adolescent and young girls fear and apprehension related to HIV and health system shut outs as key barriers to HIV services in Zambia (Chikuba-McLeod); (2) South African boys’ gender and sexual-related perceived norms/misconceptions as a potential mechanism between sexual risk and intimate partner violence (Tarantino); (3) the high prevalence (60%) of gender-based violence among female entertainment workers in Cambodia (Chhoun); (4) men’s perspectives on physical and sexual violence perpetration and the link with high risk sexual behaviors (Olberg); and (5) the finding that over 50% of female students in Eswatini do not disclose their experience of penetrative sexual assault to anyone (Shabalala). These presentations offer guidance for the ongoing challenges associated with gender and gender-based violence in efforts to address the HIV epidemic in resource-limited settings.

As the title of session OAD06, PrEP Around the World, suggests, presentations in this session offered a sample of work across the globe to optimize the effective use of PrEP. In Canada, researchers reported on event-level data of MSM and transgender persons use of PrEP over time, noting a range of factors that predicted use of PrEP with specific partner characteristics (Lachowsky). Other sessions reported on the importance of trans-competent care in the context of PrEP use among transgender women in Vietnam (Green); the high rate of discontinuation of PrEP (88%) among adolescent girls and young women in Lesotho; the emerging data on incident syphilis among persons on PrEP in Brazil (Orneas Pereina); and the promise of a pilot intervention for US women to address barriers along the PrEP cascade of care (Van Tieu). As progress is made in ending the HIV epidemic, such work on understanding the addressing the population and culture-specific factors linked to PrEP will continue to be paramount.

OAD08, TikTok: Time’s Running Out For Adolescents and Young People’s Health, offered insights into the context of HIV risk and treatment among younger groups. This included a focus on risk factors for suicide attempts among US perinatally-infected youth (Kreniske); the high prevalence of depression linked to early-onset sex work among young women in Malawi (Grosso); the continued evidence of the harmful impact of non-disclosure of HIV status on treatment adherence in Ugandan adolescents with unsuppressed HIV viral loads (Jjuuko). A presentation by Carey demonstrated how human-centered design can be used to guide the development of interventions for adolescents living with HIV in Mozambique. Finally, to offer guidance for future research to reach young people, Day presented barriers and opportunities for engaging young people in HIV research from a seven-country adolescent research consortium.